SCIF uses its MPN to feed Anthem a steady stream of providers from whom, together, they extract 15% of the providers’ reimbursements. It is unclear exactly how Anthem and SCIF split this 15%. It is crystal clear that something needs to stop Anthem and SCIF from enriching themselves with reimbursements purloined from providers.

In the scheme documented below, which on its face fits the dictionary definition of payola, SCIF and Anthem provide the best evidence that MPNs do not help injured workers return to work. Instead, MPNs increase profits for entities like Anthem and SCIF at the expense of those who treat injured workers.

Theoretically, employers establish and maintain MPNs. In reality, insurers and third-party administrators (TPAs) often dictate which providers are included in an employer MPN (self-insured employers and some insurers use TPAs to manage workers’ comp claims).

TPAs and insurers like SCIF use the Anthem network of providers to populate the employer MPNs. The scheme works as follows: 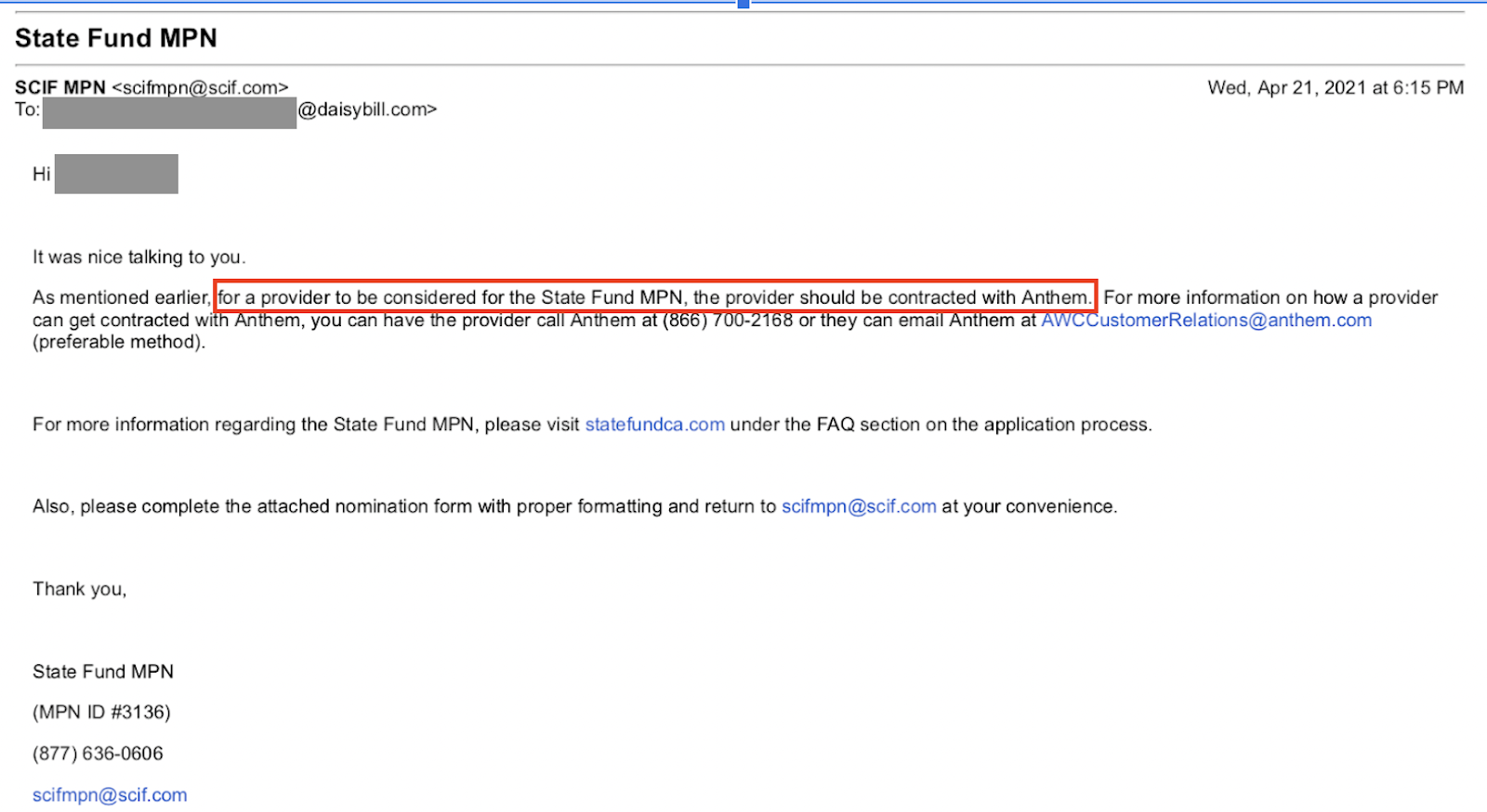 As mentioned above, DaisyBill does not know the financial arrangements between SCIF and Anthem. Is Anthem keeping the provider’s 15% reimbursement or is Anthem sharing this 15% with SCIF?

Is the California workers’ compensation system meant to empower Anthem Blue Cross and SCIF so that they can skim revenue from providers and enrich themselves?

As we reported previously, one provider caught in the SCIF/Anthem trap found reimbursements cut for a long list of payers. When the provider disputed the reimbursement discounts for non-compliance with the Labor Code, Anthem removed the provider from its network.

Once removed from Anthem, SCIF also removed the provider from its MPN, and commenced transferring patients away from the provider.

The result was that a patient under the provider’s care was transferred to a different provider. By all accounts, the patient was distressed by the switch — apparently an acceptable bit of collateral damage for SCIF and Anthem to maintain their (payola or worse?) scheme.

The purpose of torturing this provider — and patient — appears to be to simply squeeze more revenue out of the practice. The role of MPNs, as controlled directly by insurers like SCIF and indirectly by middle-people like Anthem, seems to be nothing more than to harvest unearned revenue. Lining pockets, not quality or cost control, is apparently an MPN’s only real function now.

DaisyBill helps providers obtain accurate reimbursement, quickly. We navigate fee schedules and complicated billing rules — so you don’t have to. Click below to learn more.