Welcome to another round of IBR Chicken, where California claims administrators (falsely) deny payment for the treatment of injured workers for implausible reasons — and keep denying payment right up until the moment the provider pays $180 to request Independent Bill Review (IBR).

Once again, SCIF denied payment for a Medical-Legal evaluation (requested by SCIF) with a bogus denial reason. The Qualified Medical Evaluator (QME) appealed, and SCIF denied the appeal with another randomly concocted denial reason. The QME paid $180 to request IBR, and only then did SCIF have one of its signature last-second changes of heart, agreeing to pay.

QMEs, you can expect Chicken Champs like SCIF to continue improperly refusing payment for your evaluations, because SCIF can always tap out once you invoke IBR. Undoubtedly:

Without consequences for this kind of payer behavior, QME reimbursements are nothing more than chicken feed for SCIF.

SCIF requested a Comprehensive Medical-Legal Evaluation, and sent loads of medical records for the QME to review (1,014 pages, to be exact). There is no dispute as to SCIF’s request for the evaluation — and therefore SCIF’s responsibility to pay for it — as the letter below demonstrates: 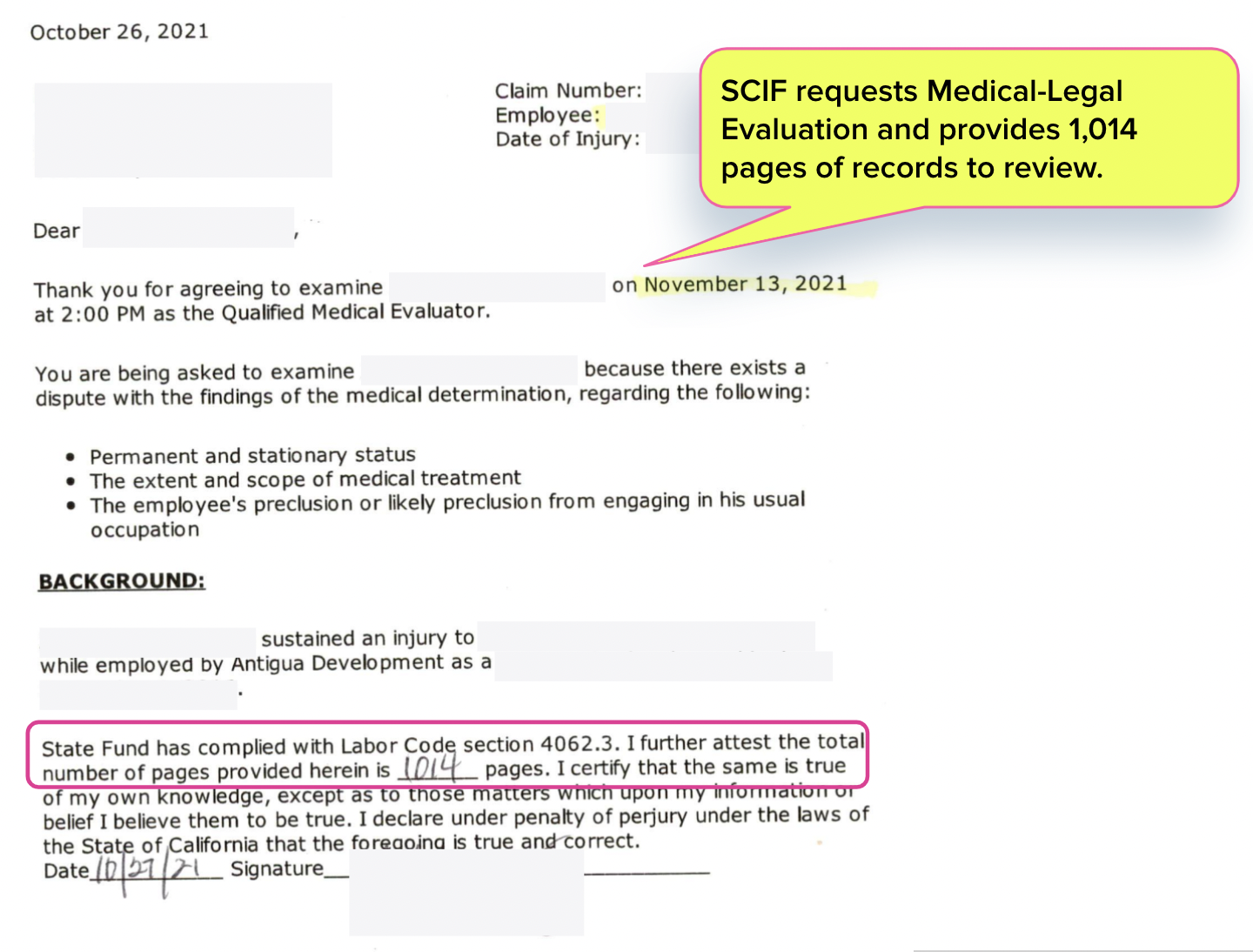 Yet when the bill came due, SCIF’s Explanation of Review (EOR), shown below, inexplicably (and falsely) denied the charges as “exceed[ing] the fee schedule/maximum allowable or contracted/legislated fee arrangement.”

The reimbursement owed per the Medical-Legal Fee Schedule (MLFS) is clear and straightforward, and the bill reflected correct MLFS rates. But this is IBR Chicken, and the rules of the game dictate that SCIF has to put something on the EOR, however nonsensical. 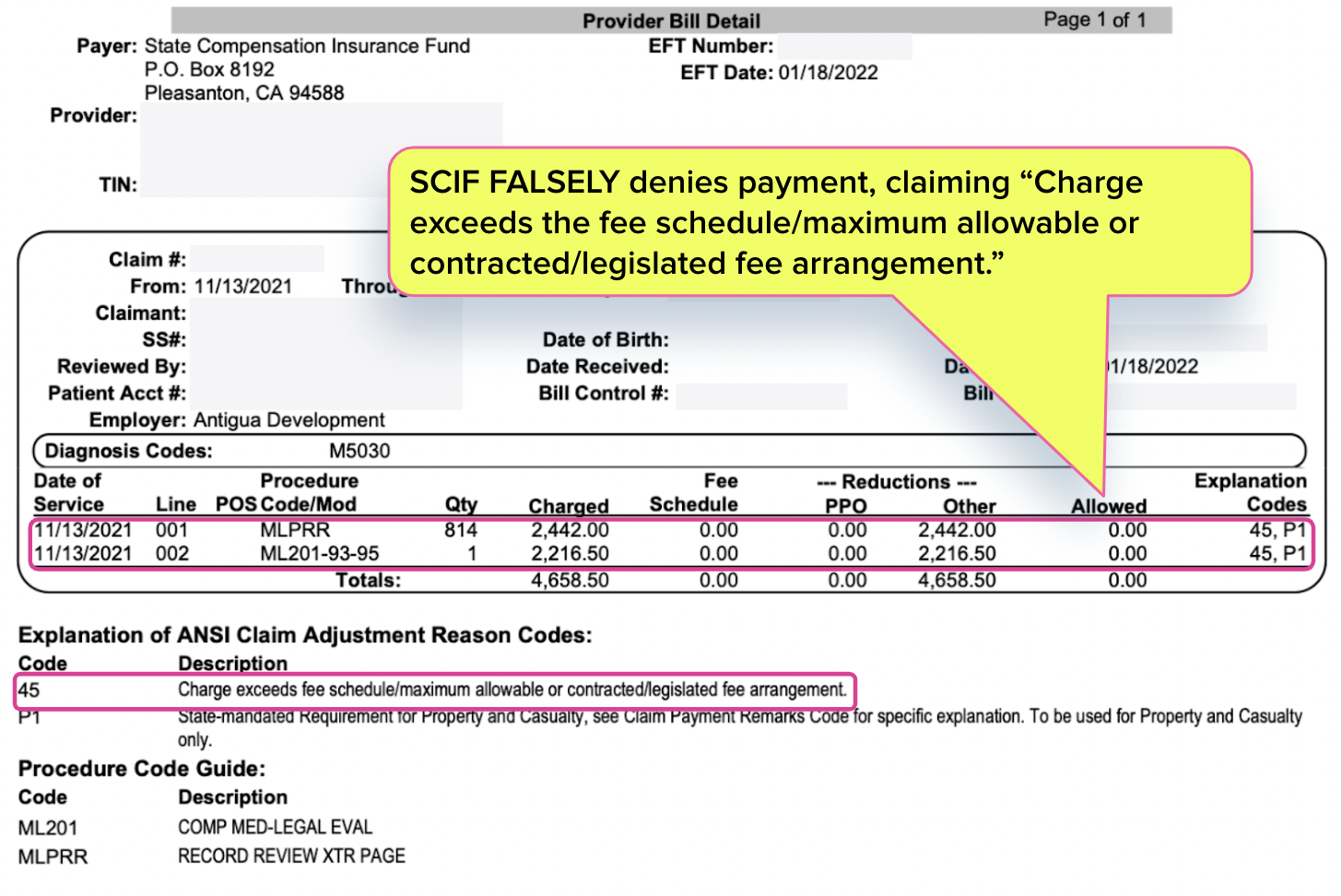 Appropriately, the QME submitted a Second Review appeal to SCIF to dispute the absurd denial. 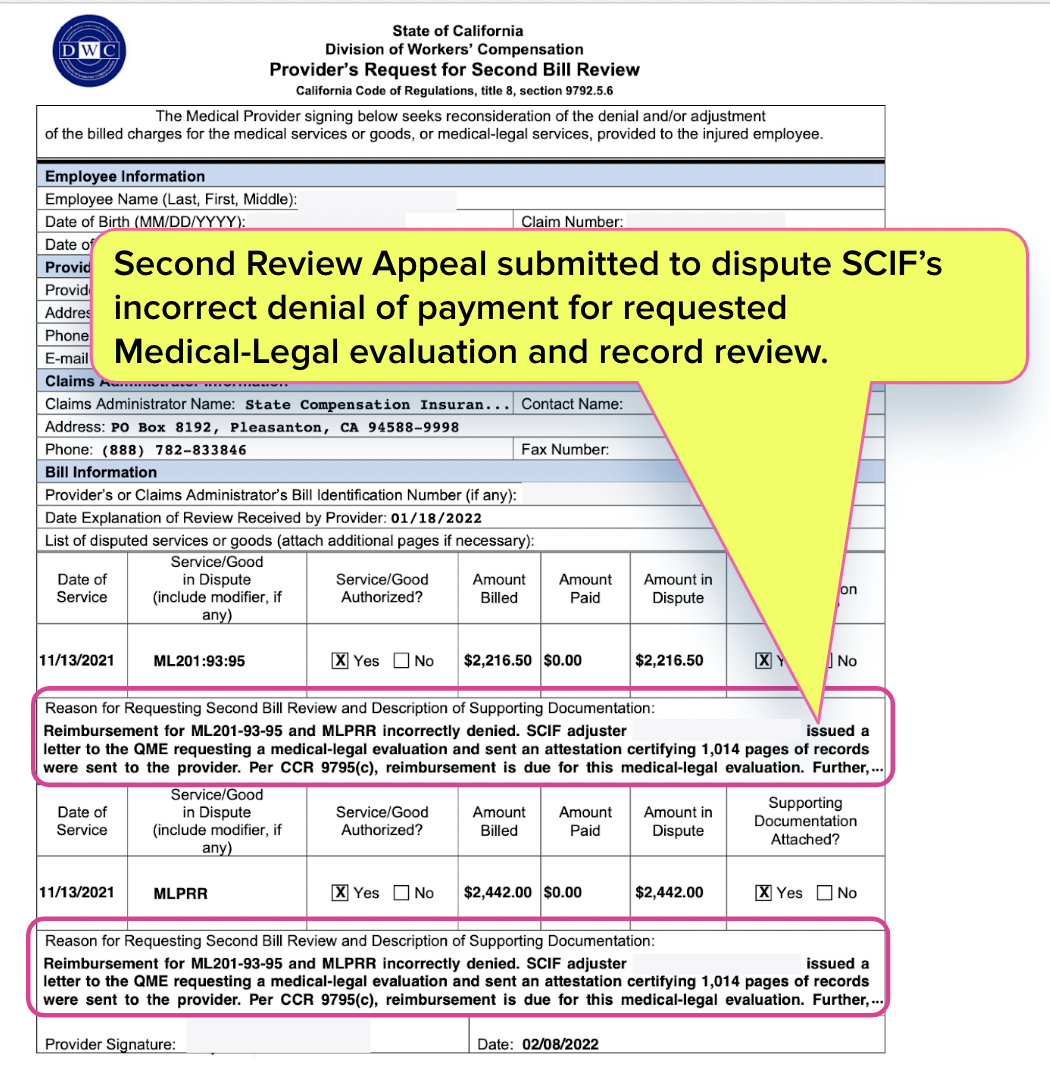 In response to the Second Review appeal, SCIF claimed that Paradigm Management Services was responsible for the bill. Paradigm is a discount contracting network, and therefore cannot possibly be involved in reimbursement for Medical-Legal (as opposed to medical) services.

But that basic and well-established fact didn’t stop SCIF from playing the Paradigm card, because why not? In IBR Chicken, there are bonus points for creativity, however misleading. 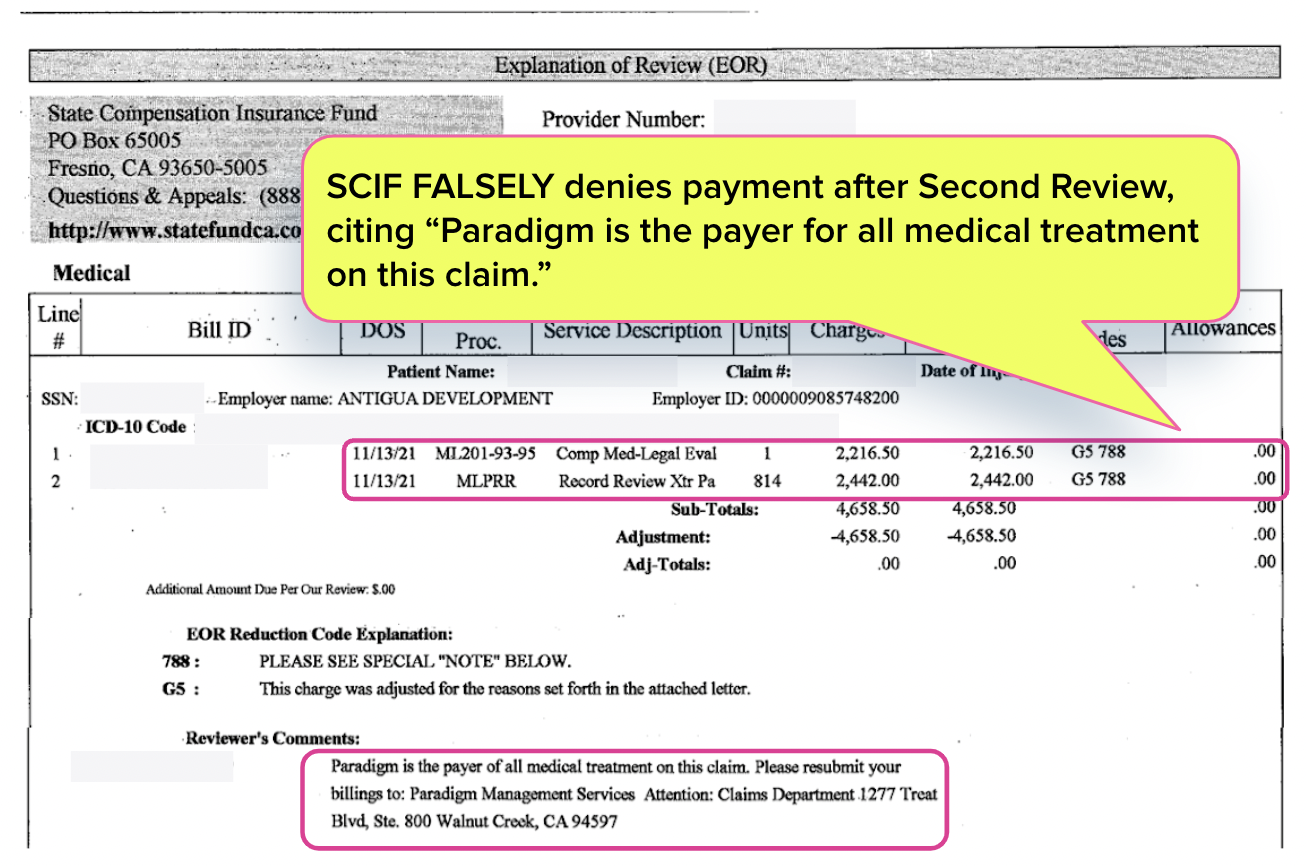 SCIF Skitters Away From IBR

With its second denial, SCIF left the QME no choice but to request IBR from Maximus, the entity that conducts IBR on behalf of the Division of Workers’ Compensation (DWC). The request required the QME to: 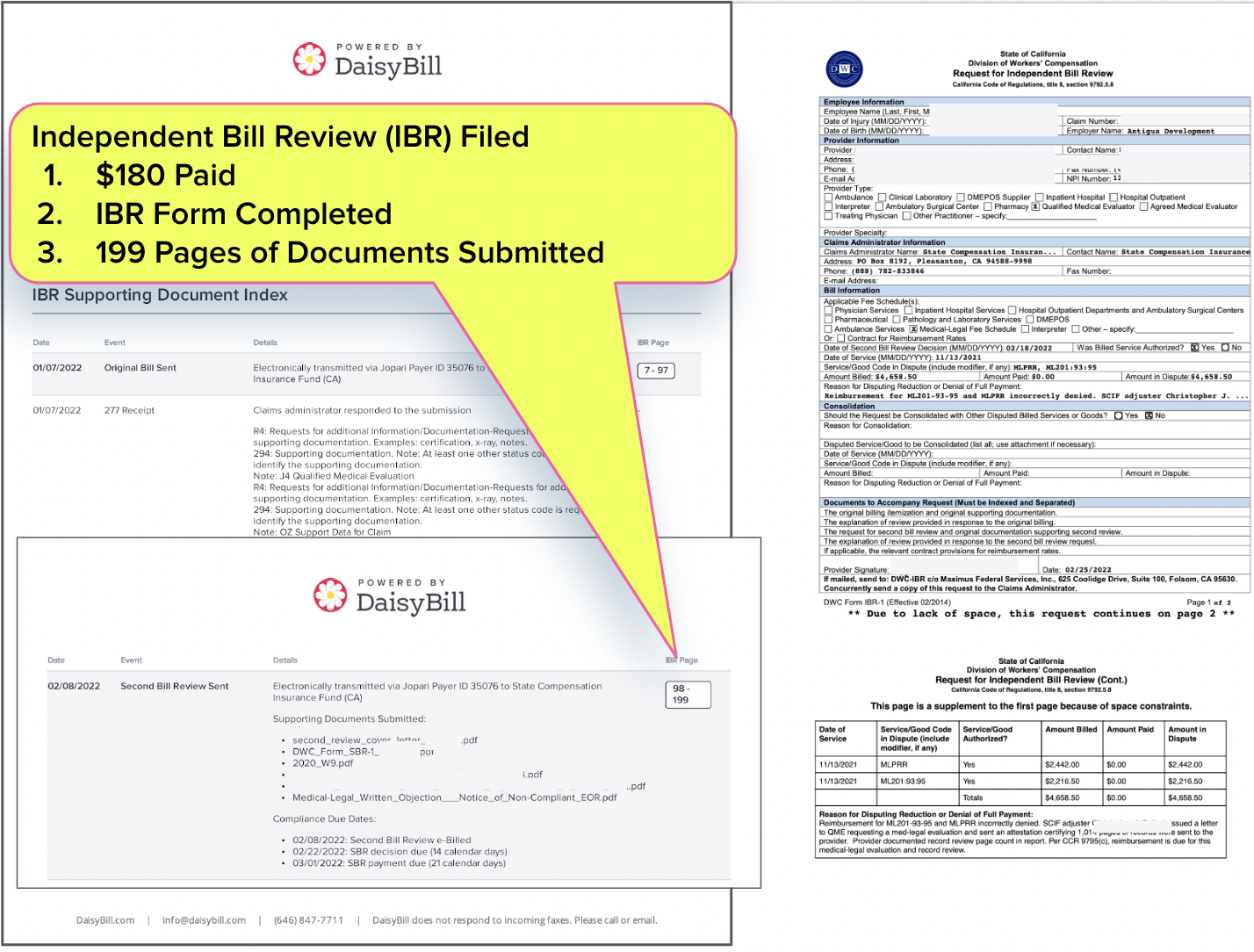 Suddenly, miraculously, the scales fell from SCIF’s eyes, and the insurer professed the truth. Having put this QME through every bit of hassle and administrative expense necessary to fight the false denial, SCIF reversed course, “determined” that its own denial reasons were nonsense, and agreed to pay the disputed amount.

SCIF then wrote to Maximus contesting the QME’s IBR request, claiming that “Absent a payment amount that remains in dispute, there is no issue remaining that can be resolved through the independent bill review process’ — a line copied and pasted from many a SCIF letter attempting to evade IBR. 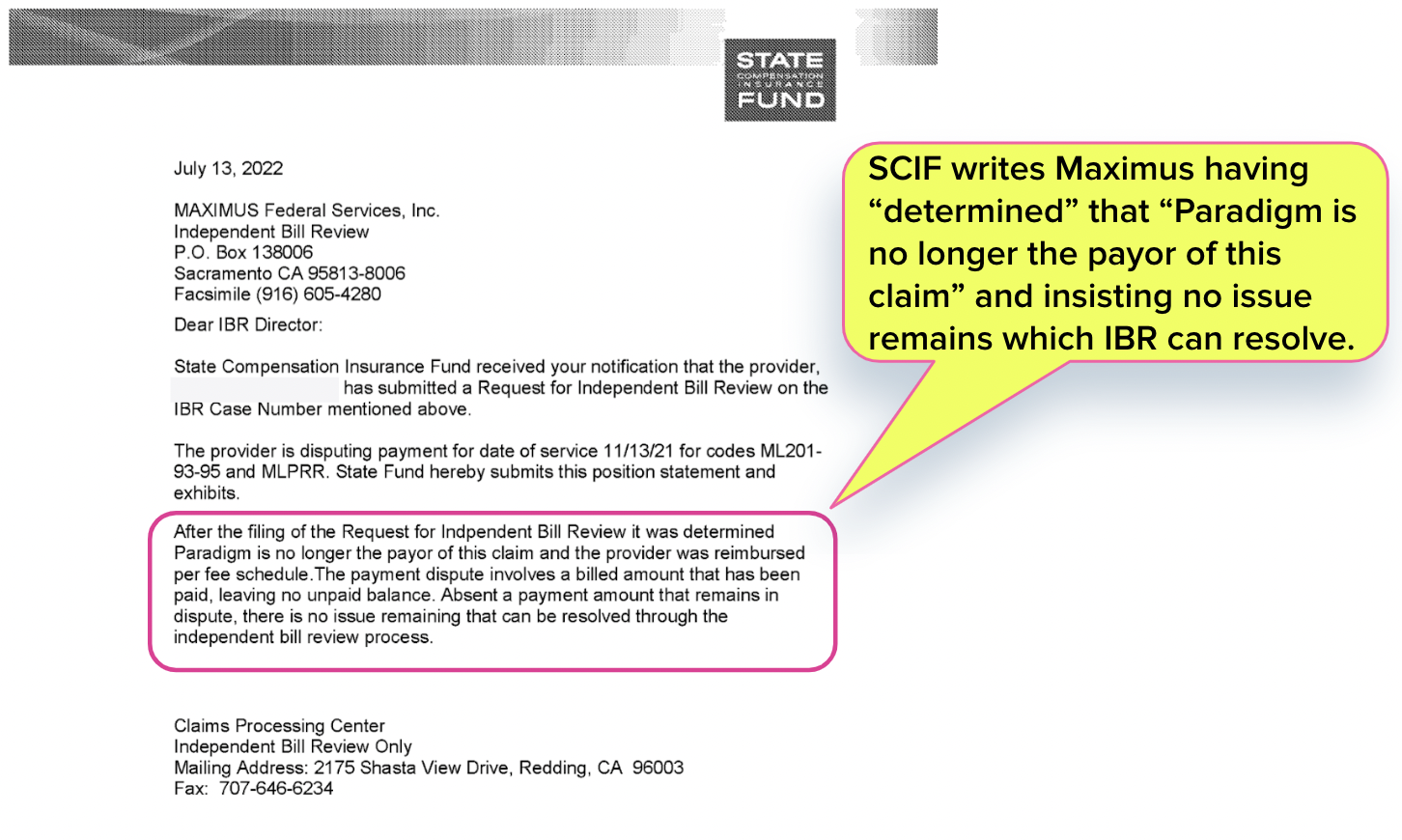 SCIF reimbursed the QME the full amount in dispute, and — to SCIF’s credit — also self-executed the appropriate penalty and interest charges. However, SCIF did not restore the $180 filing fee to the QME (or the time and administrative cost necessary to fight SCIF for payment).

The dispute was deemed eligible for IBR; Maximus will adjudicate the bill, and, if there’s anything like justice in California workers’ comp, determine that SCIF owes the QME the $180 IBR filing fee in addition to the disputed amount, penalties, and interest paid.

That said, $180 is not the most important thing at stake in this scenario.

Improperly denying payment over and over, only to relent when the provider brings the issue to the state, is SCIF abusing California workers’ comp. It’s a waste of both the providers’ and the DWC’s time and resources, and a drag on an already frictious system.

We encourage Maximus to make a decision that can be encompassed in one word: Enough.