In California workers’ comp, one of the biggest — but least talked about — challenges for providers is navigating the Medical Provider Network (MPN) system.

MPNs were established for a reasonable purpose. An employer or its workers’ comp insurer creates an MPN to establish a trusted circle of providers who can be relied on to offer appropriate care for their injured workers. Unfortunately, MPNs have also become a vehicle for claims administrators to improperly deny payment.

California workers’ comp law holds the doctor responsible for determining their own inclusion (or lack thereof) in the MPN established by the insurer or employer paying for the injured worker’s treatment. Yet in practice, it’s often incredibly difficult for a doctor to figure out:

This MPN misrepresentation makes it critical for doctors to be on the lookout for illegitimate MPN-based denials. Recognizing such improper denials requires doctors to know:

Bottom line: abuse of the MPN system necessitates incredible vigilance on the part of doctors — yet another example of the friction that drives California doctors away from treating injured workers.

California allows insurers and self-insured employers to establish an MPN to restrict the providers that treat the injured workers for whom they are financially liable. In other words, California empowers the entity paying for a worker’s treatment to determine the list of providers eligible to offer that treatment. California Labor Code Section 4616 states:

In accordance with the above, California allows the following entities to establish an MPN:

However, this relatively straightforward system is complicated by the fact that California also allows a fifth kind of entity to apply to the DWC for approval of an MPN:

When establishing an MPN, an insurer or employer may use an “entity that provides physician network services” to assist in fulfilling the provider access and other MPN requirements. While hardly clarifying, California CCR §9767.1. offers the following definition of these “entities”:

“Entity that provides physician network services” means a legal entity employing or contracting with physicians and other medical providers or contracting with physician networks, and may include but is not limited to third party administrators and managed care entities, to deliver medical treatment to injured workers on behalf of one or more insurers, self-insured employers, the Uninsured Employers Benefits Trust Fund, the California Insurance Guaranty Association, or the Self-Insurers Security Fund, and that meets the requirements of this article, Labor Code 4616 et seq., and corresponding regulations. [emphasis added]

It is crucial to understand that while a provider may sign an MPN contract with an entity that provides network services, signing this contract does not confer MPN membership in an employer or insurer’s MPN. Remember, California law empowers only the employer or insurer to direct care through an MPN.

Upon receipt of an MPN-based payment denial, the provider must verify that the employer or insurer for the employer has established an approved and active MPN. Below are the necessary steps in making this determination.

The image below from the DWC online MPN list shows some of the different types of MPN applicants described above, including network service entities. In a perfect world, determining whether a provider is eligible to treat a given patient should be as simple as checking a comprehensive MPN database somewhere. In reality, it’s an extraordinary struggle.

The DWC MPN list comprises 2,477 MPNs in total. Of those: Currently, there are only 193 approved MPNs established by either an insurer or employer, which means many self-insured employers and insurers do not maintain an MPN that can restrict which doctors may treat their injured workers. Given that 86% of MPNs are no longer operable, it is critical that doctors undertake the steps below to verify every MPN payment denial.

Determining how the employer for the injured worker maintains workers’ comp coverage is the first and most critical step in determining whether there is an applicable MPN. Use the Explanation of Review (EOR) to establish the following:

Below is an example of an EOR from Sedgwick that indicates the following:

This EOR information indicates that Amazon is not a self-insured employer. Instead, Amazon’s workers’ comp insurer is LM Insurance. The insurer is the only organization empowered to establish an MPN for Amazon injured workers.

By contrast, the Sedgwick EOR below is for the treatment of an injured employee of FedEx (Chino branch). FedEx is a self-insured employer — and therefore FedEx has the exclusive right to establish an MPN and restrict its employees to doctors within that MPN.

As the DWC MPN list shows, the FedEx MPN is active and approved, as indicated by a blank status (yes, that’s confusing, too).

In the example below, we search for MPNs operated by AIU Insurance, which offers workers’ comp coverage for California employers.

Searching for AIU produces 10 results on the DWC’s MPN page — but under “MPN Approved Status,” the results list 9 of the 10 AIU MPNs as either “T” (Terminated) or “W” (Withdrawn). Only the first result, Deseret Signature MPN, with MPN ID number 3178, is approved effective July 7, 2022. Since AIU has only one functioning MPN, we can presume it’s the MPN that includes all the providers who may treat injured workers whose employers are covered by AIU.

The DWC MPN List page will include a URL for the website for each active MPN. Simply (as though any step has been simple…) copy and paste the URL into your browser. Once you’re on the MPN website, there should be a way to search for providers by name, or otherwise see which providers are members of the MPN in question (this is not always the case, which we’ll address in future posts).

In the AIU example, the website for AIU’s MPN, Deseret Signature MPN, allows practices to search for the provider by name or location, noting that providers may only treat covered workers at approved locations. The page also provides a contact phone number for the Medical Access Assistant (MAA) responsible for making timely appointments on behalf of injured workers. Crucially, both the MPN homepage and the search page timestamp the last time the provider list was updated; as MPNs can add or remove providers at any time, this is critical information. 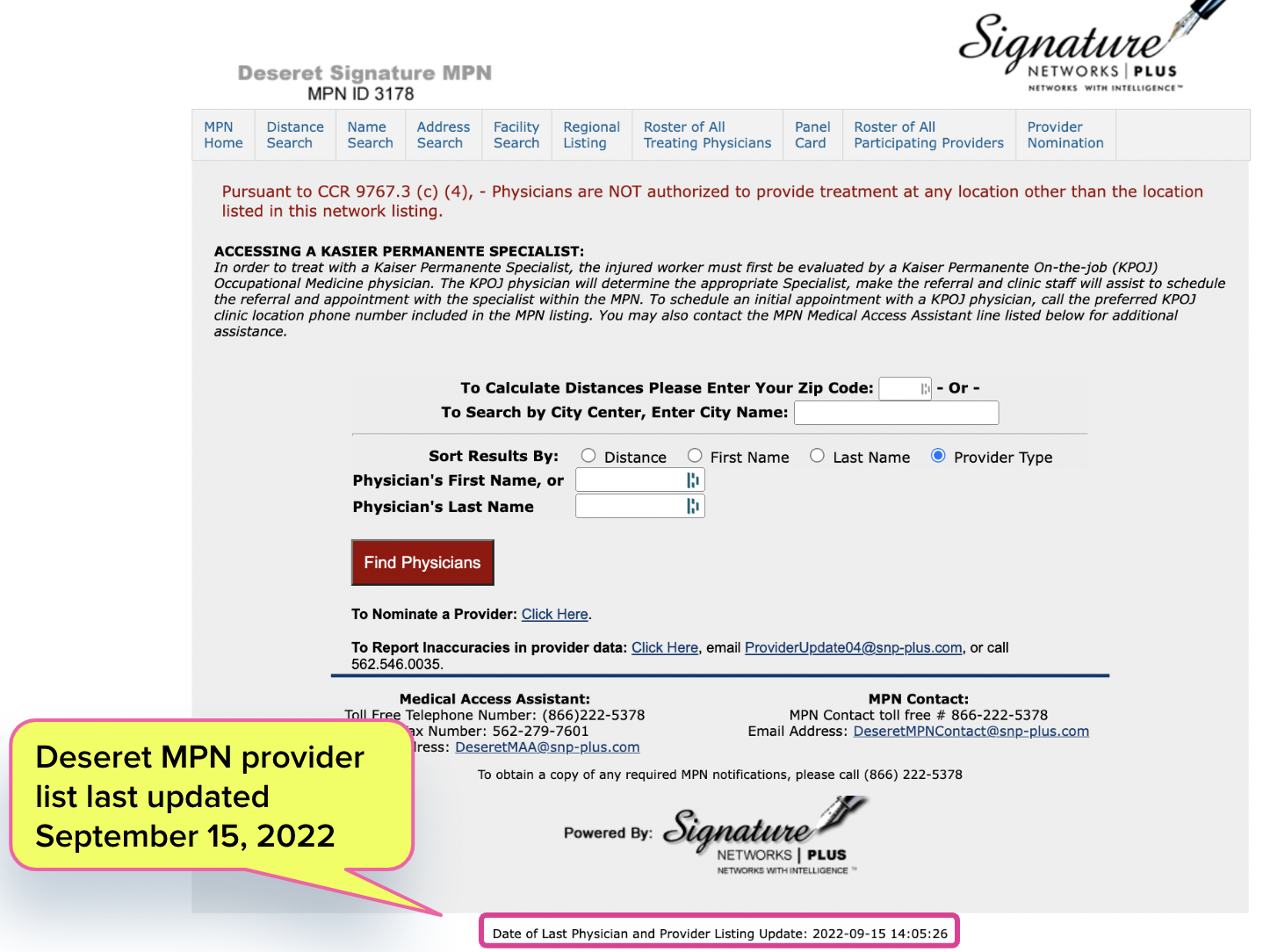 Remember: this example is a best-case scenario; following the steps above is not always as (relatively) simple as AIU and Deseret make it.

In future articles, we’ll explore what can make the job of determining MPN participation much, much more difficult — and how persistent payment denials based on non-participation in MPNs of questionable legitimacy, run by “entities” that are neither insurers nor employers, is making workers’ comp hell for many practices.