It’s been said that insanity is best defined by doing the same thing repeatedly, but expecting different results. If that’s the case, Sedgwick Claims Management Services has officially unmoored itself from reality — or settled on the cynical business practice of citing blatantly inapplicable bill denial reasons to improperly withhold doctors’ pay.

Sedgwick recently denied payment to a Qualified Medical Evaluator (QME) for a Medical-Legal Evaluation. The reason furnished on the Explanation of Review: the QME wasn’t in the insurer or employer’s Medical Provider Network (MPN).

There is likely no one with even a passing understanding of California workers’ comp who doesn’t understand that MPNs have no bearing on Medical-Legal billing and payment. Moreover, only insurers and self-insured employers — not Third-Party Administrators (TPAs) like Sedgwick — may determine which providers are eligible to treat the workers they cover.

Even more depressingly, it was only recently that California ordered Sedgwick to remit over $20,000 to a QME, for doing this exact same thing. It was ridiculous the first time; this time, it almost seems like Sedgwick is daring California to impose some consequence for its behavior.

MPNs: Not Applicable to Med-Legal

First, the plain and well-known fact: no claims administrator can deny reimbursement for Medical-Legal services because the physician is “out of network.”

QMEs are selected from state-designated panels, and are requested by one of the parties to perform evaluations necessary to resolve liability disputes. MPNs, Preferred Provider Organizations (PPOs), and other networks do not come into play. Ever.

If Sedgwick had any excuse for being unaware of this plain and well-known fact the first time, surely being ordered to pay the largest amount ever awarded to a daisyBill client via Independent Bill Review (IBR) should have taught the TPA a sorely-needed lesson in workers’ comp 101. Yet here we are.

As the EOR below shows, Sedgwick denied a QME payment for a Comprehensive Medical-Legal Evaluation, citing:

“...THE SERVICE WAS PERFORMED OUTSIDE THE CLIENT’S MPN NETWORK.”

“...THE SERVICE WAS PROVIDED OUTSIDE THE DESIGNATED NETWORK.” 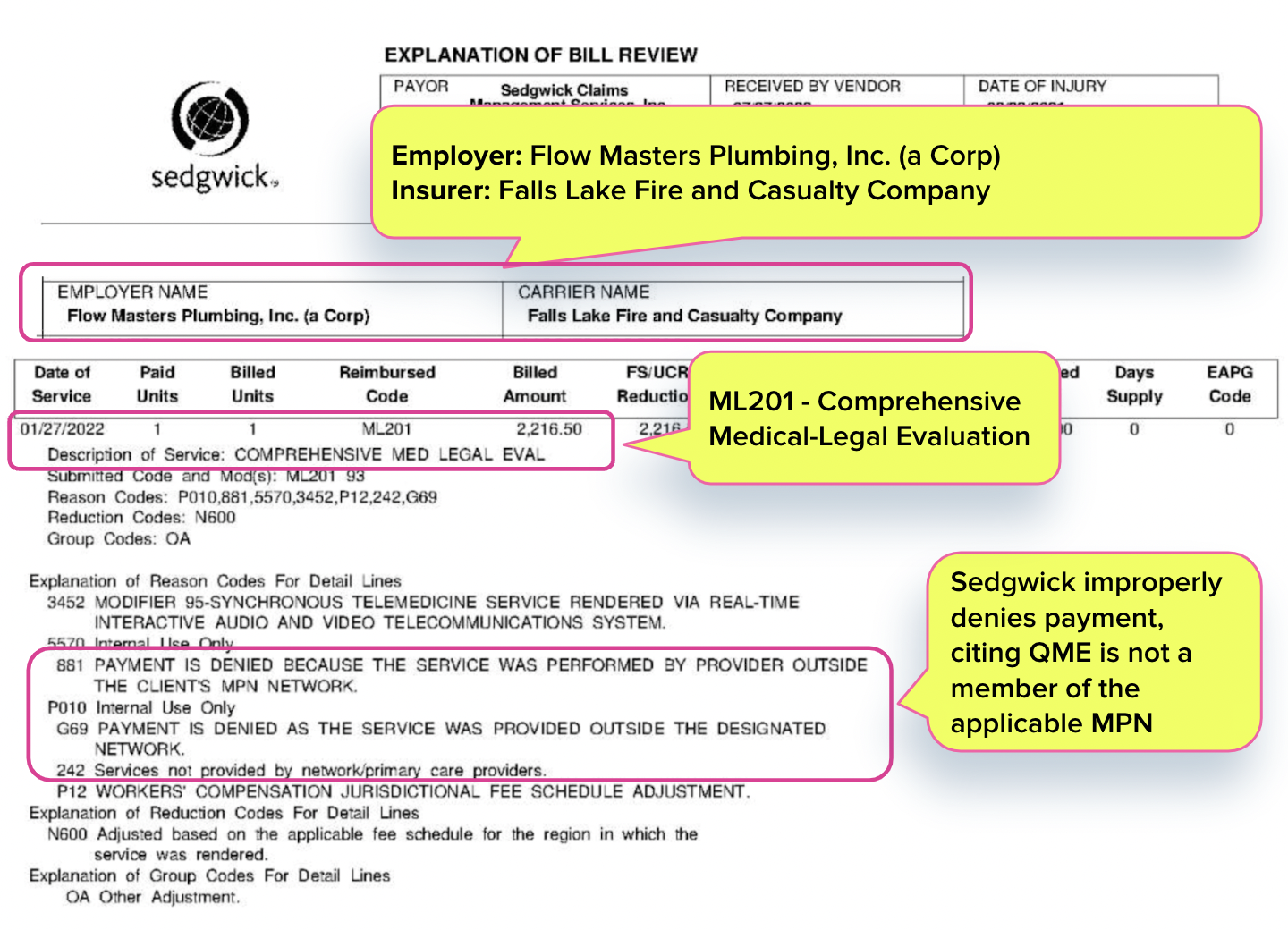 Putting aside the fact that the services billed are Medical-Legal services not subject to MPNs, Sedgwick makes another error, one that’s unfortunately all too common. “THE CLIENT,” as the EOR puts it, is the party paying this bill. In this case, that would be the insurer, Falls Lake Fire and Casualty Company, the workers’ comp insurer for the employer, Flow Masters Plumbing, Inc.

Only Falls Lake, as the employer’s insurer, may dictate which providers are “in network,” as California Labor Code Section 4616 makes clear in stating:

Falls Lake, however, does not maintain an MPN, as a search of the Division of Workers’ Compensation (DWC) online MPN list reveals.

Even if MPN participation applied to Medical-Legal evaluators (which it does not), Sedgwick payment denial is patently false since the insurer does not maintain an MPN.

Sedgwick has always been a champion at finding new and innovative ways to be bungle their job — but that shouldn’t adversely affect a Medical-Legal evaluator who simply did their own, and rightfully expects to be paid, rather than exploited by a claims administrator flinging false MPN payment denials.