California allows insurers and self-insured employers to establish Medical Provider Networks (MPNs) to direct injured workers’ care. While Employers Preferred Insurance Company is allowed to establish an MPN, this insurer is not allowed to falsely deny payment for authorized care based on a phantom, non-existent MPN.

California regulations empower only the company paying for a worker’s care (the insurer or self-insured employer) to establish MPNs restricting where the injured worker obtains that care. Below, see how Employers (an insurer) denied payment for authorized treatment by falsely citing that the provider was not in the applicable MPN — despite the fact that Employers has no approved MPN listed by the Division of Workers’ Compensation (DWC).

All workers’ comp stakeholders should be outraged that claims administrators are using MPNs to play three-card-monte with payment owed to the doctors who agree to treat injured workers.

In this case, the provider furnished authorized treatment to an injured employee of Vestra Labs, LLC, insured by Employers Preferred Insurance Company. To be absolutely clear:

The provider received the document below from EIG Services, Inc. authorizing requested treatment, including a transfer of care to a specialist. 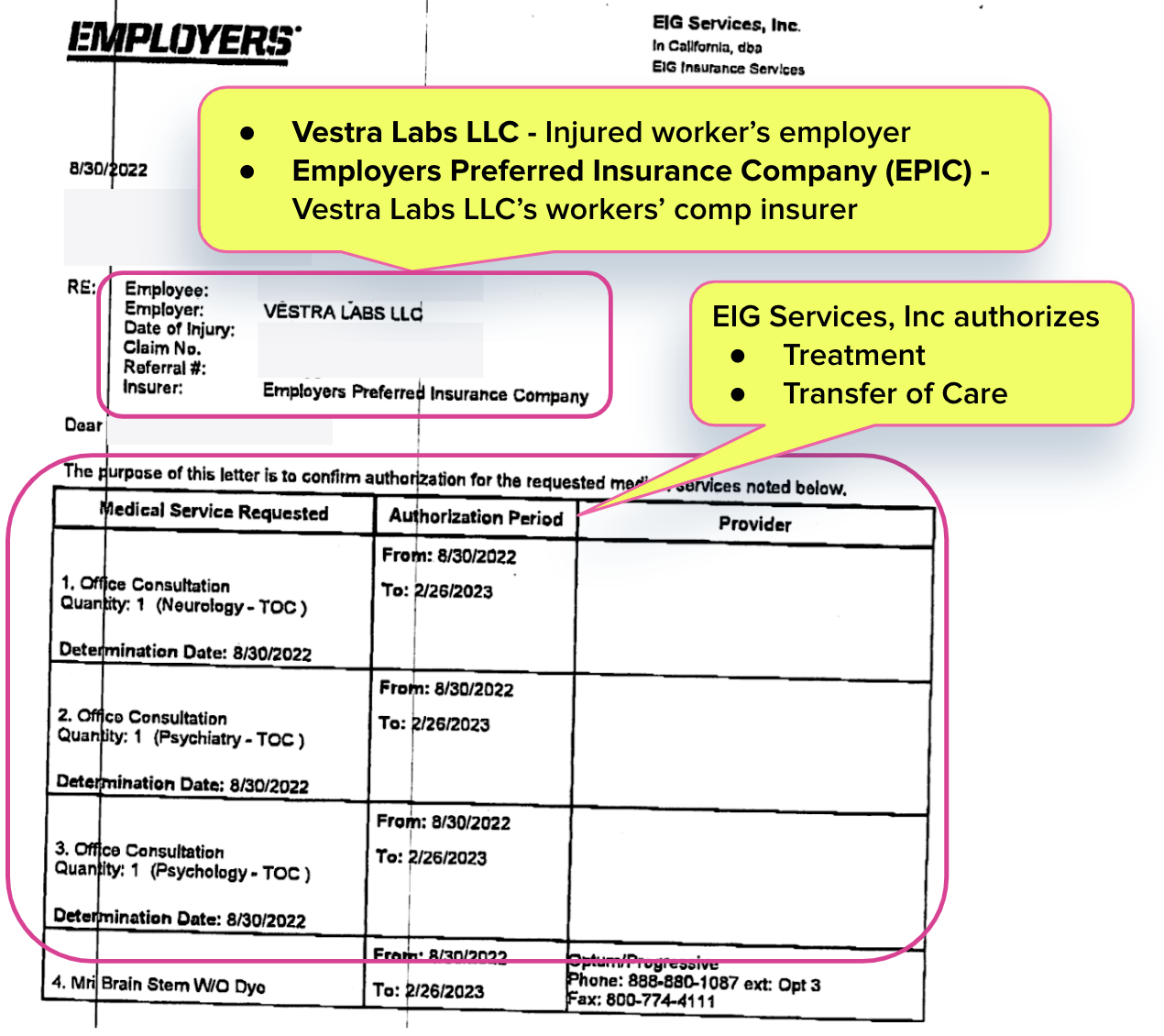 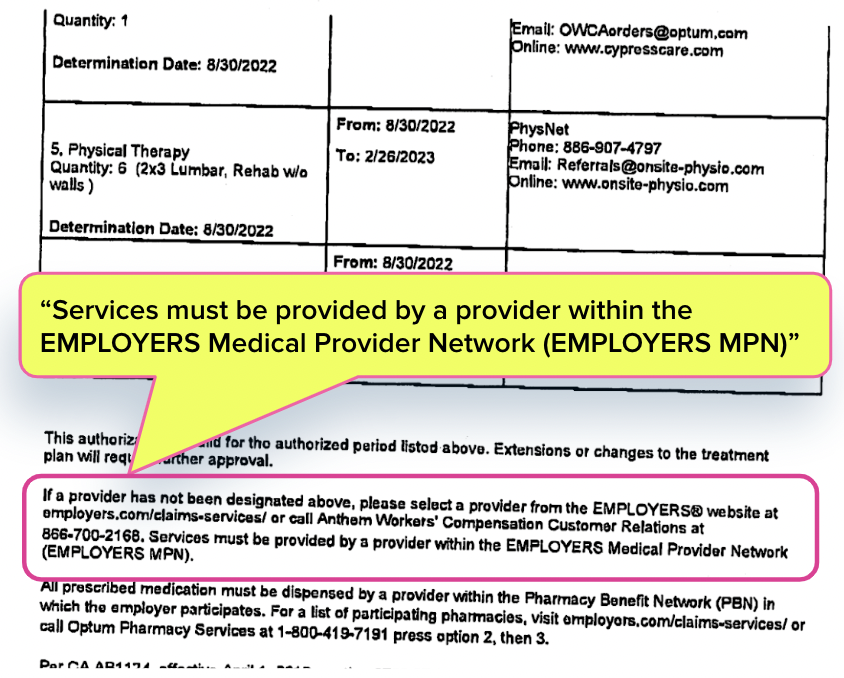 A search of the DWC’s MPN list (shown below) does not list an active or approved MPN for Employers Preferred Insurance Company, the insurer in this case. While the DWC MPN website lists an MPN with the name of ‘Employers MPN,’ as indicated on the authorization document, this MPN does not list Employers Preferred Insurance as the Applicant. Instead ‘Employers Compensation Insurance Company’ — an “entity that provides network services” — is listed as the Applicant.

Name discrepancy aside, as we know from previous articles, an “entity that provides network services” is not an insurer or employer’s MPN. Rather, these are entities which provide network services to insurers and employers that choose to establish an MPN.

We have established that Employers Preferred Insurance Company authorized the treatment provided to the injured worker, and that this insurer does not maintain an approved MPN. Yet, this insurer denied payment to the provider for alleged MPN non-participation, as the Explanation of Review (EOR) below shows. 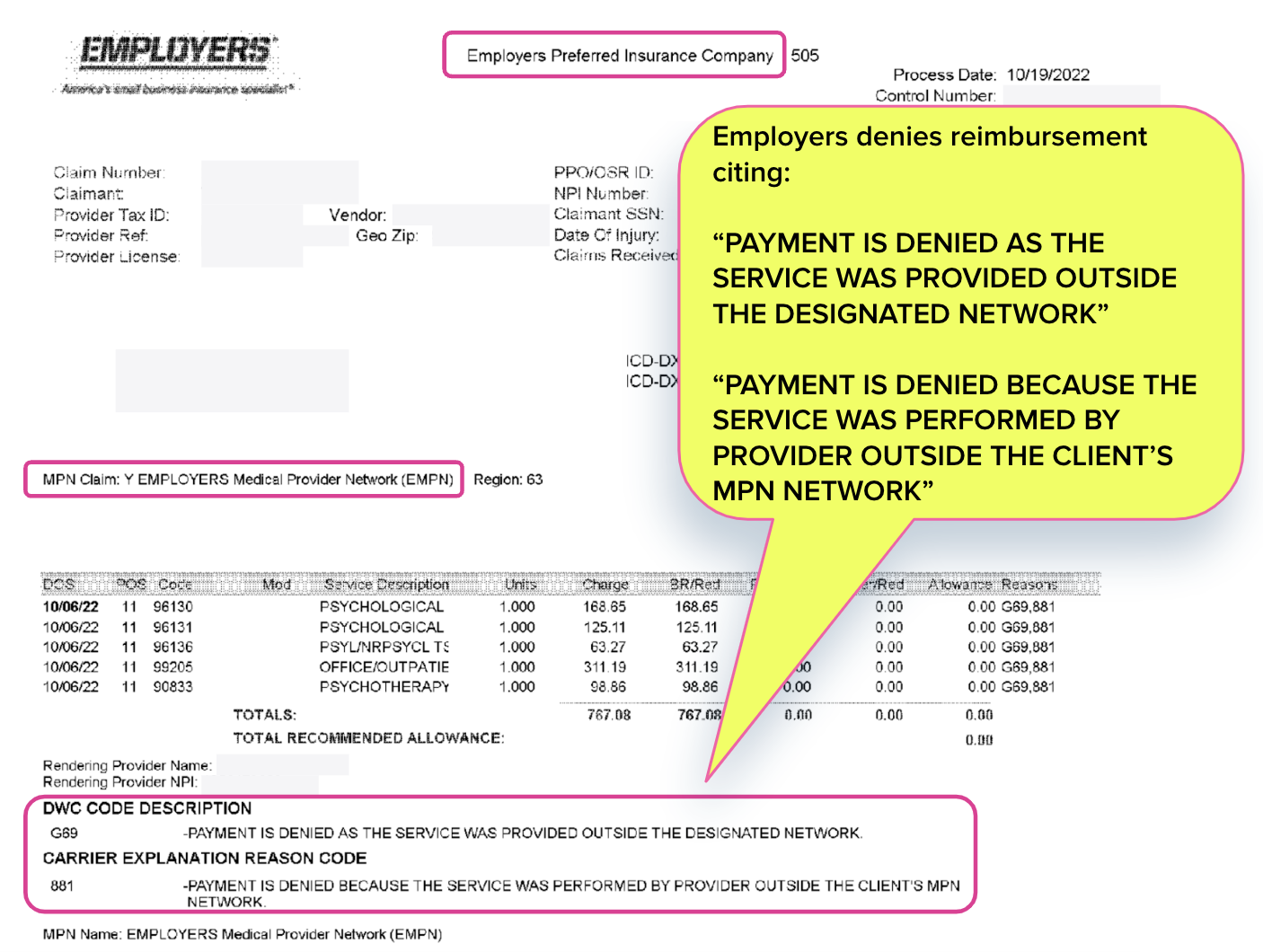 Moan. Grimace. Wave the flag and surrender? As long as abuse of the MPN system is allowed to defund doctors, injured workers will continue struggling to find practices willing to treat them.