This underpayment “error” resulted in many, many thousands of underpaid Physician Services bills.

Even when providers appealed for correct 2019 payments, Sedgwick, Liberty, York, and SCIF all denied the appeals for correct payment. These denials force providers to file expensive ($195), labor-intensive, and paper-wasting Independent Bill Review (IBR) appeals to receive the correct reimbursement.

Sedgwick has been the subject of not one, but two, articles about the systematic underpayment of providers:

In early February, DaisyBill contacted Sedgwick on behalf of our providers to determine how the Sedgwick compliance team intended to handle thousands of incorrect payments.

On 2/5/2019, Sedgwick’s Vice President of Workers Compensation Practice and Compliance emailed the following instructions to DaisyBill:

My team [is] committed to having all impacted bills reviewed this week with the appropriate adjustments made with any additional payments owed issued to the provider.

Hopefully this will alleviate you from having to send any additional requests for review.

This should not be an issue going forward.

However, on 2/27/2019, DaisyBill again contacted Sedgwick regarding an incorrect payment received by one of our clients. Notably, the Sedgwick representative contradicted the Sedgwick Vice President of Compliance.

We called about a bill for the employer Macy’s. It was another instance where Sedgwick incorrectly reimbursed a 2019 DOS using the 2018 fee schedule. This resulted in Sedgwick underpaying the provider by $27.94, which represents an approximately 8% underpayment. Details of the incorrect Sedgwick reimbursement below: 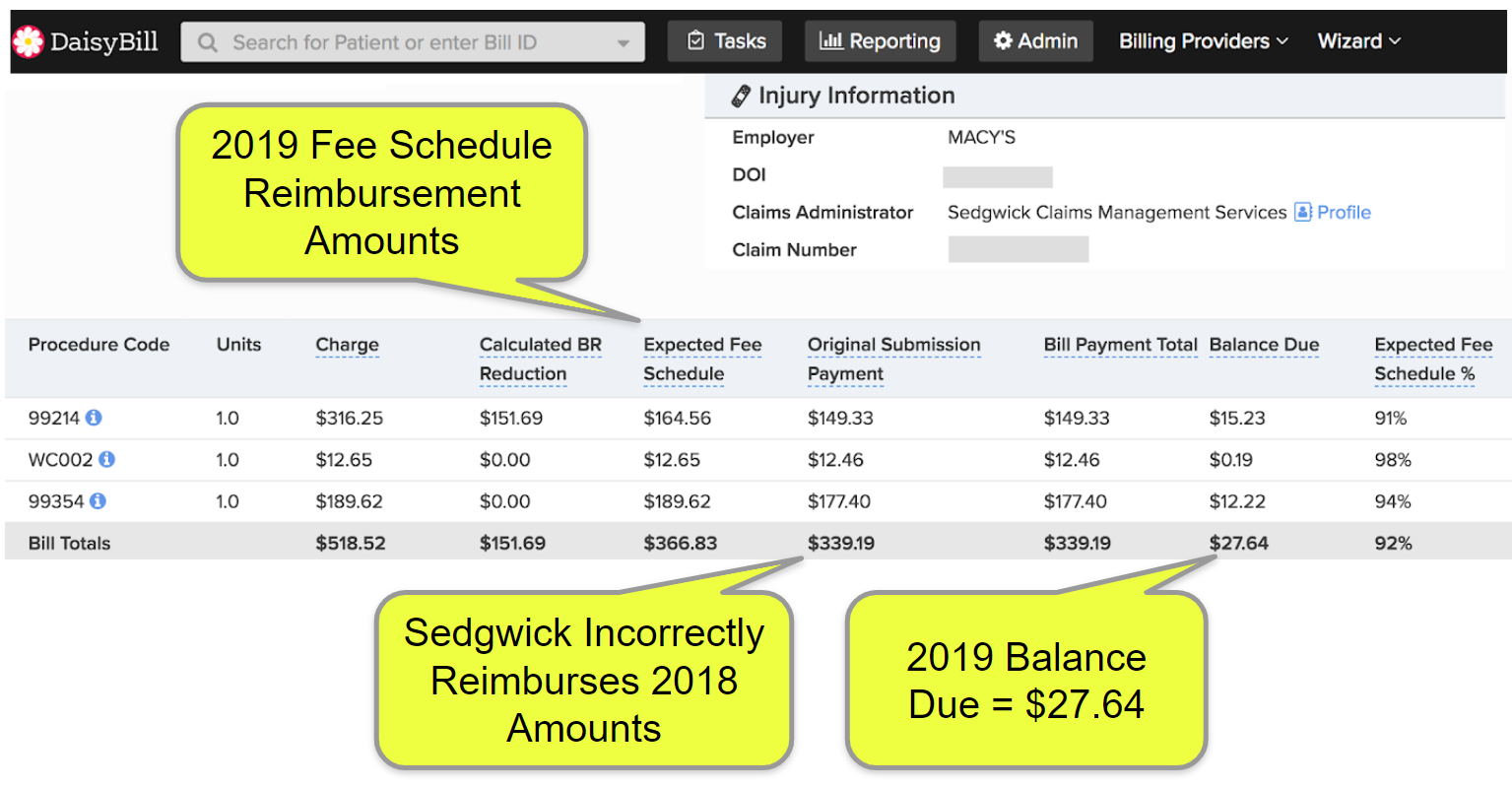 For this Macy’s bill, the Sedgwick representative reported: “Bills are not being reprocessed and no additional money will be sent.” Further, the representative instructed DaisyBill to submit a second review appeal for the money due.

BUT WAIT! What happened to the promised “additional payments owed the provider”?

DaisyBill ran a quick report of employers impacted by Sedgwick’s incorrect 2019 reimbursements to providers. The list of employers is extensive, so below we listed just a few of the employers who ostensibly demonstrate the value of customer service. We expect these employers also value their employees -- an extraordinarily important asset. Here at DaisyBill, we question whether these employers are aware that Sedgwick is underpaying and subsequently misleading medical providers who treat their injured employees?

The SCIF representative indicated that all providers, not just DaisyBill providers, would receive additional payment.

DaisyBill will keep you updated on the receipt of the additional payments from SCIF.

On Friday 2/15/2019, DaisyBill published a blog post describing how Liberty Mutual incorrectly reimbursed providers for 2019 dates of service: Liberty Mutual Trifecta of Incorrect Payments. We have yet to hear about a substantive response, which is a bit unusual given Liberty Mutual’s characteristic conscientiousness and timeliness.

DaisyBill has not heard from York regarding any corrective measures for its systemic incorrect 2019 reimbursements.

This does not surprise us as we have plenty of experience with York’s lack of responsiveness and substandard service to providers. In addition to our post about 2019 incorrect payments, here are two additional examples detailing York’s continued lack of regard for providers who treat injured workers in California.

Nothing prevents payers from flouting the annual changes to the OMFS on this scale of magnitude. Certainly not fear of public admonishment nor the collective ire of medical providers.

In California, the workers’ compensation system places the burden on providers to appeal incorrect payments, even when the claims administrators are clearly at fault. However, the scope of this large-scale payment mistake is such that it is patently unfair to expect providers to individually appeal the thousands upon thousands of bills that have been incorrectly underpaid.

Would a $100,000 administrative penalty be sufficient motivation to help providers and to save the trees which are destroyed by the unnecessary appeals and IBRs?

For readers of this blog, you can subscribe to the DaisyBill Work Comp Wizard for two weeks for FREE. Use the promotional code: LIBERTY when you subscribe.

See how easy it is to know the correct 2019 fee schedule reimbursements. You, too, can hold the payers accountable for correct reimbursement.