California’s Division of Workers’ Compensation (DWC) has a duplicity problem.

In the third chapter of our series on The Zenith and Anthem Blue Cross, we discover that in order to receive correct reimbursement, the doctor must pay $150 to file a lien — kicking off a laborious process that can take months or years to resolve.

Why a lien, instead of Independent Bill Review (IBR)?  Because the DWC has thrown doctors who treat injured workers under the wheels of the lien bus.

It is impossible to make sense of this decision. By declaring a straightforward dispute over reimbursement amounts ineligible, the DWC failed to adhere to very clear IBR precedent, including cases where IBR specifically addressed contract reimbursement disputes.

Despite the creation of IBR to resolve disputes like this more efficiently than the Workers’ Compensation Appeals Board (WCAB) possibly could via lien, the DWC has reintroduced lien chaos to California.

The purpose of IBR is to more quickly resolve disputes involving only the amount of payment owed per the applicable fee schedule or reimbursement contract. The point is to allow the WCAB to focus solely on more complex disputes involving “threshold” issues like liability.

As the DWC website states, Second Bill Review (SBR) and IBR were established to:

...expediently decide billing disputes where the only issue is the amount to be paid for the medical service provided. If the medical service is covered by a fee schedule adopted by the Division of Workers’ Compensation (DWC)...or set forth in a contract for reimbursement (Labor Code section 5307.11), then SBR and IBR must be utilized to resolve the dispute within a matter of weeks, as opposed to possible years under the WCAB lien system [emphasis added].

To dispute the invalid Liberty/Anthem PPO discount, the doctor adhered to California law and paid $180 to request IBR. Previous IBR decisions (aka: precedent) dictates that the IBR case should’ve been open and shut.

But this is California workers’ comp, where it can seem like a sport to exploit doctors who choose to treat injured workers. Read on to learn which team the DWC roots for (spoiler alert: it is not the doctor).

Because there is clear precedent from dozens of similar PPO disputes resolved by IBR, the doctor felt confident that Maximus (the state-appointed IBR organization) would overturn the phantom PPO reduction that Liberty Mutual and Anthem took, and restore full reimbursement to the doctor for treating an injured worker.

Unfortunately (for workers’ comp providers), the DWC ruled that the Liberty Mutual/Anthem PPO dispute was ineligible for IBR. In its ruling, the DWC claimed that IBR can only take place “if the only dispute…is the amount of payment owed to the provider.”

According to the DWC, in this case “...the payment dispute involves the applicability of a PPO contract to the provider. This is not an issue that can be resolved through the independent bill review process.” 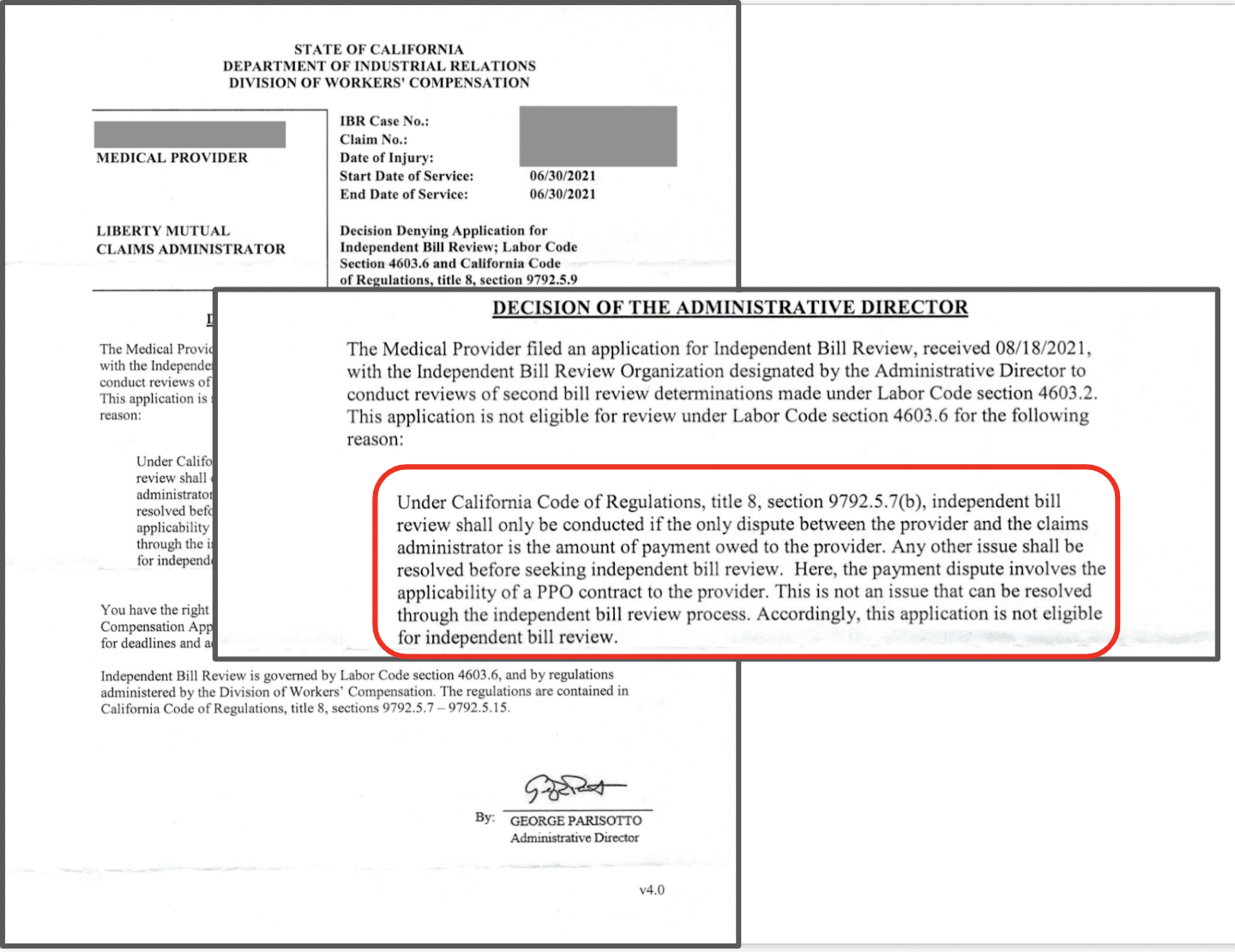 The DWC’s rationale is duplicitous. In the absence of a contract, “the amount of payment owed” is “the only dispute”.

Resolving this Liberty/Anthem reimbursement dispute is a simple matter of confirming that the payer failed to produce a PPO contract. More importantly, the DWC’s argument is also self-contradictory, since IBR has resolved multiple PPO disputes exactly like this one.

For a single example, see the IBR decision below. 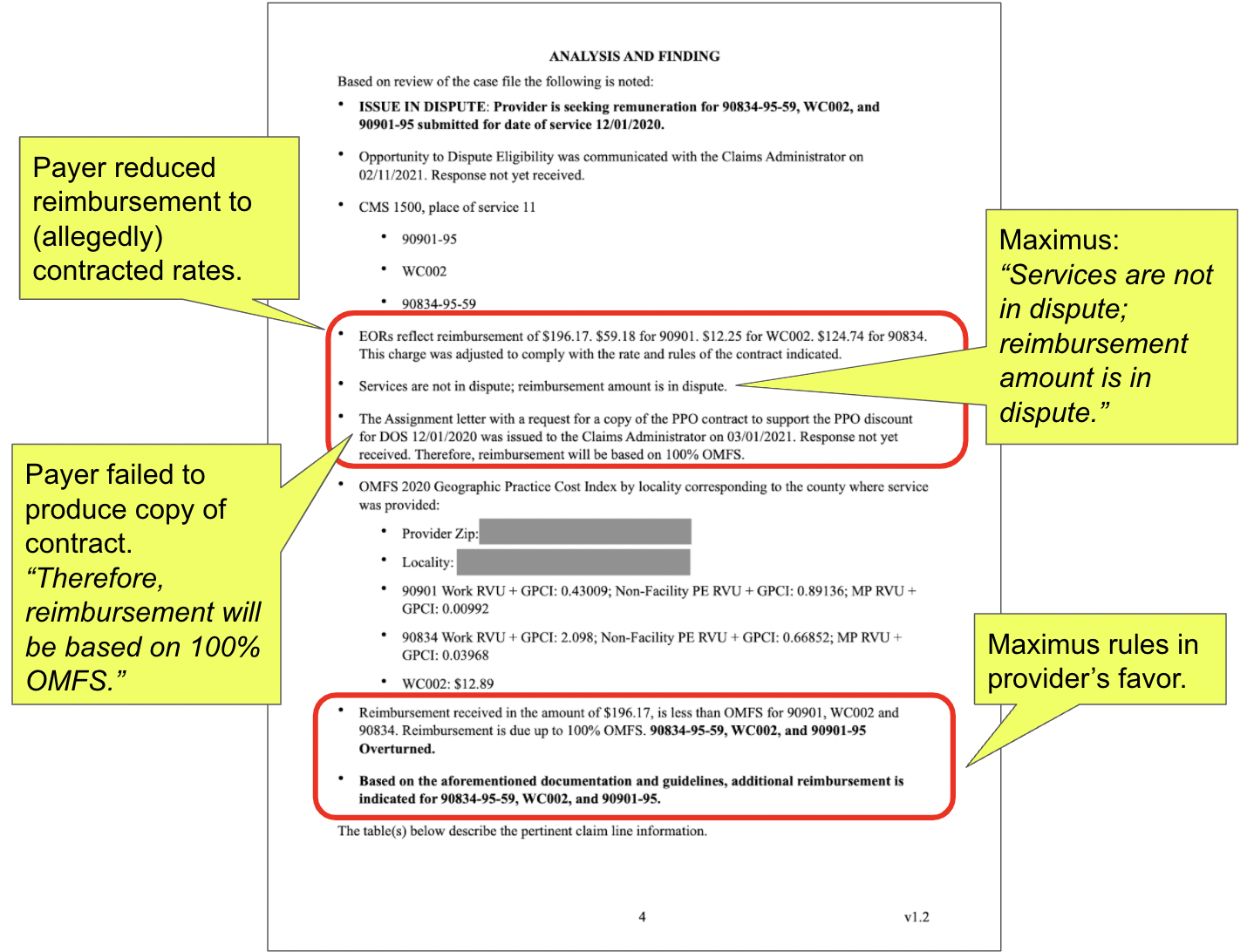 In the PPO dispute above (and many, many, many others like it), Maximus noted in the Analysis and Finding that the payer failed to produce the alleged contract, and that therefore the bill should be calculated using the good ol’ OMFS.

But for reasons unknown, Maximus deferred the Liberty/Anthem IBR case back to the DWC to determine eligibility. The DWC, true to its recent habit of defaulting to an “ineligible” ruling at the slightest whiff of helping a payer, threw precedent (and logic) out the window, along with the IBR case.

The DWC Ignores The DWC

In addition to ignoring IBR precedent, the California DWC also ignored its own instructions for the applicability of IBR to settle billing disputes. On an official FAQ webpage, the DWC specifically instructs providers to use IBR when the payer accepts liability and there is a “dispute as to the amount owed under the OMFS or contract.”

Below are the exact IBR instructions provided by the DWC [with emphasis added]:

If there is admitted liability for the injury and body part being treated, and the medical treatment is described in the OMFS or a contract for reimbursement, the medical provider should file for IBR if there is a dispute as to the amount owed under the OMFS or contract. Filing a lien in such situations is unnecessary and overloads the system with erroneous filings.

By ignoring its own IBR instruction and declaring the Liberty Mutual/Anthem IBR ineligible, the DWC forces all workers’ comp providers to file liens to dispute reduced reimbursements that payers take based on unverified PPO contracts.

(Tip for Payers: Forget Anthem. Why bother even naming the PPO? Pay as little as you want and call the reduction “PPO Savings,” with the DWC’s blessings.)

As detailed in Parts 1 and 2 of this series, Zenith also cited an Anthem PPO discount to reduce payment for a bill. When the doctor demanded the duo cough up a contract that would substantiate their right to reduce payment, both parties failed to produce anything.

Without a signed PPO contract, logic and California law dictate that Zenith must reimburse the doctor 100% of the amounts established by the Official Medical Fee Schedule (OMFS). Zenith, apparently unconcerned by the missing contract, refused to pay the doctor the correct reimbursement.

Now, the doctor must file a lien to receive the reimbursement that Zenith and Anthem simply took while ignoring every single California law that forbids this doctor exploitation.

Remember, Zenith and Liberty Mutual are not the only payers using the phantom Anthem contract to take money from this doctor. In total, eleven payers reduced the doctor’s bills to as little as 55% of the rates established by the OMFS.

According to the DWC and its most recent IBR ruling, this doctor must file a lien for each instance in which the following eleven payers reduced reimbursement based on the still-unsubstantiated Anthem contract:

Throughout 2021, we repeatedly demonstrated that many California payers (and apparently regulators) treat the doctors who care for injured workers as little more than annoying detritus. As we approach 2022, the landscape for California workers’ comp providers looks more and more like a tundra — one that just got even more bleak.